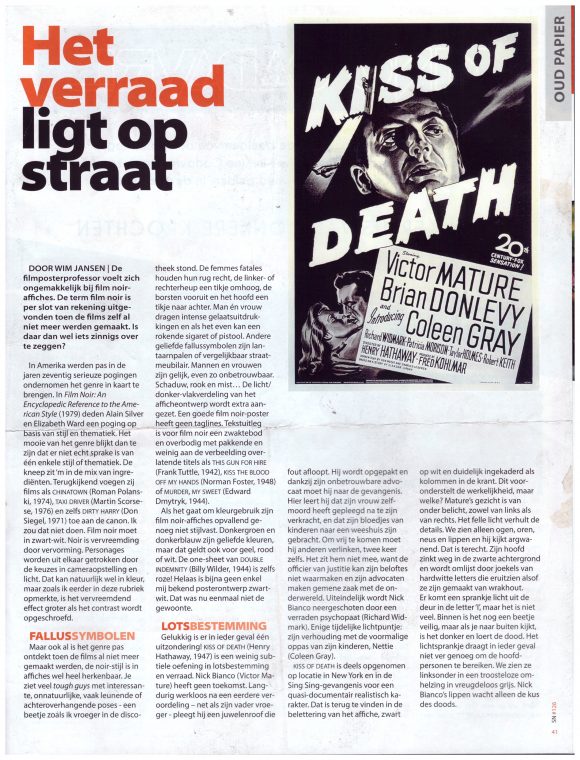 BY WIM JANSEN: The filmposterprofessor is a bit uneasy with film noir posters. The genre film noir was invented at the time the movies themselves weren’t made anymore. So what about the posters? What can you say about those?

It wasn’t before the 1970’s that serious attempts were made to analyze the genre. In Film Noir: Reference to the American style (1979, edited by Alain Silver and Elizabeth Ward) an encyclopedic attempt was made based on style and theme that showed the true attraction of film noir, the hybridization of style and theme. It’s all in the mix. Silver and Ward add retrospectively titles as CHINATOWN (1974, Roman Polanski), TAXI DRIVER (1976, Martin Scorsese) and even DIRTY HARRY (1971, Don Siegel) to the film noir canon. I would not have done that. Film noir has to be in black and white. Noir is alienation by distortion. The characters are distorted by choices on camera position and lighting. It is feasible to that in colour, but – as I’ve noted in an earlier edition of OLD PAPER–  the alienation factor is greater when the contrast is pushed to the max.

Although the genre was truly to be be discovered when the films were not longer made, there is a definite noir style to be found in posters. There are a lot of tough guys with interesting, but rather unnatural poses, often crouching or leaning backwards. A bit like me in the night club when I was still a young man. Femmes fatales have a straight back, the left or right hip slightly up, breasts pushed forward and the head slightly tilted back. Both man and woman have an intense mien and carry if possible a smoking cigaret or gun. Other favorite phallic symbols are lampposts or similar pieces of street furniture. In a way men and women are equal, you can’t trust them equally. Shadow, smoke and mist… The contrast between the light and dark areas of the posters (see sting in the tail) is cranked up. Importantly a good film noir poster does not have or need a tagline. Explanation by text is a weakness and unnecessary when you promote a film called THIS GUN FOR HIRE (Frank Tuttle, 1942), KISS THE BLOOD OFF MY HANDS (Norman Foster, 1948) or MURDER, MY SWEET (Edward Dmytryk, 1944). Striking observation is  that the use of color in noir posters is not style-proof. Dark green or dark blue are always favorite to emphasize a sense of doom, but there are also a lot of noir posters with yellow, red or white as the leading colors. The one-sheet for DOUBLE INDEMNITY (Billy Wilder, 1944) is pink! Unfortunately there are very few black and white posters. That was quite simply not the norm for advertising posters in the 1940’s and early 1950’s.

At least there is one example! KISS OF DEATH (Henry Hathaway, 1947) is a less than subtle exercise in fate and treachery. Nick Bianco (VICTOR MATURE) has no future. Unemployed for a long time with an early conviction – just like his father had- he’s part of a jewelry heist that goes wrong. He is arrested and sent to prison without any help from his shifty lawyer. Here he learns about his wife’s suicide after being raped and about his darling little kids who are sent to the orphanage. To be released from prison he needs to rat out others twice. Still he can’t get a break as the DA is not able to commit on his promises and his lawyers make common cause with the underworld. Eventually Nick is shot by psychopath RICHARD WIDMARK he ratted out. In between the dreadfulness there’s just a slight flicker of joy of a romance with the former nanny of his kids COLEEN GRAY.

KISS OF DEATH is shot partially on location in New York and Sing Sing-prison which gives it a quasi-documentary realistic feel. That feel is recreated in the poster in the lettering of the credits. Framed in black on white it looks a bit like an announcement in a news paper. It suggests a certain objective reality, but what reality? Mature’s face is lit from below on the left and on the right side. The sharp light takes away the details. We only see eyes, ears, a nose and lips. He seems to be suspicious and he has reasons to be. His head sinks into the black background and is surrounded by big and hard white letters that look like they are made from wrack wood. He is all shuttered up. There is a glimpse of light coming from the door in the letter “I” but it isn’t much. There’s a little bit of security inside, but when you look outside it is dark and death is lurking. In any case the light does not travel enough to reach the doomed lovers. We find them in the left bottom corner in a disconsolate embrace in joyless grey. Nick’s lips only await the kiss of death.