Pardon the pun, but here’s the fifth column for the April/May 2017 issue of Schokkend Nieuws magazine.

Filmmakers like to “quote” and  “reference”. By quoting they show how they love movies themselves and how much they know about it. Due to an attentive reader of Schokkend Nieuws filmposterprofessor Wim Jansen reflects that designers of movie posters also like to quote and reference.

“Ain’t that a poster of CRASH! (Charles Band, 1976)?” asked Schokkend Nieuws-reader A van der L in regards to the Pakistani poster by Tariq in the last edition of OLD PAPER. No, it is for BLUE MURDER AT ST. TRINIAN’S. The artwork with the car carnage however is the same. The US onesheet for CRASH! is designed by Joseph Musso, production illustrator for THE TOWERING INFERNO (John Guillermin, 1974) up to the HATEFUL EIGHT (Quentin Tarantino, 2015).

Imitation is the sincerest form of flattery

Of course Tariq was not paying hommage, he just looked for some stock material and “borrowed” Musso’s. Borrowing existing material is common practice with designers. Our own poster guru Duke Wellington about who I have written in earlier editions of OLD PAPER stressed the importance of compiling as large an archive of reference materials as possible. What is existing stock material and what is original artwork? Is a realistic drawing or painting of an actor from a still original artwork? Is a portrait cut out of a still combined with some lettering original artwork? The line between stock and original is as thin as between quoting and borrowing. Quoting and borrowing is pre-eminently something for genre movies. Genre movies are driven by proven formulas and cheeky hommages to well known themes and other genre movies. How do you attract a public for an obscure genre movie with an unknown cast? By quoting freely and creatively.

That leads me to the poster for this issue of Schokkend Nieuws. It is not exactly beautiful, but it is a nice example of quoting. It’s an Italian poster for an obscure Greek low-budget thriller from 1968 or 1970. The title is NUDE ASTROP if I have to believe two Italian websites. The first Google results for Nude Astrop or SEXUALATION – the title on the poster- stopped me from clicking further and I haven’t encountered posters for this title from another country but Italy. The plot of the movie is more or less simple. The boyfriend of the daughter of a Greek shipping tycoon is in fact the leader of a gang intent on the smuggle of stolen gold to Italy. When the daughter of the Greek tycoon tries to stop this, she is blackmailed by her boyfriend with photographs of her drunk and drugged sister. Ultimately the smuggle plan fails. The Italian distributor for the film, Empire Films, understood all too well that in terms of promotion a poster with the portraits of several unknown Greek actors would not cut it. It’s not unthinkable that the movie was bought unseen with the expectation that it would involve sex or at least nudity. As it happens it does have one or two racy scenes with the photographing of the drugged sister. That gave somebody an idea.

Michelangelo Antonioni made a splash in 1966 with BLOW-UP. It’s fair to say that the posters for BLOW-UP are iconic. The image of the photographer and his model is the embodiment of the swinging sixties. The themes of the BLOW-UP posters are “quoted” without any shame in SEXUALATION. The photographer is there, but the model is caught in a net, bringing all kind of sexual insinuation into play. That suggests it’s like BLOW-UP, but more naughty. And it does not stop with the visual images. The credits also get a make-over. It’s a trick often used with Italian posters for genre movies. Cast and crew are internationalized. Director Edward G. Collins sounds much more alluring than let’s say Dimitrios Fanagulis. And then there’s the international class of Michael Eastwood (not Clint), Monica Greenwood (not Joan) and Barbara Stone (not Steele). Pièce de résistance is leading lady Vanessa Reed. Not Vanessa Redgrave from BLOW-UP, but Vanessa Reed! Not only international allure, but artistic as well! And that title on the poster will also get a bit of attention. 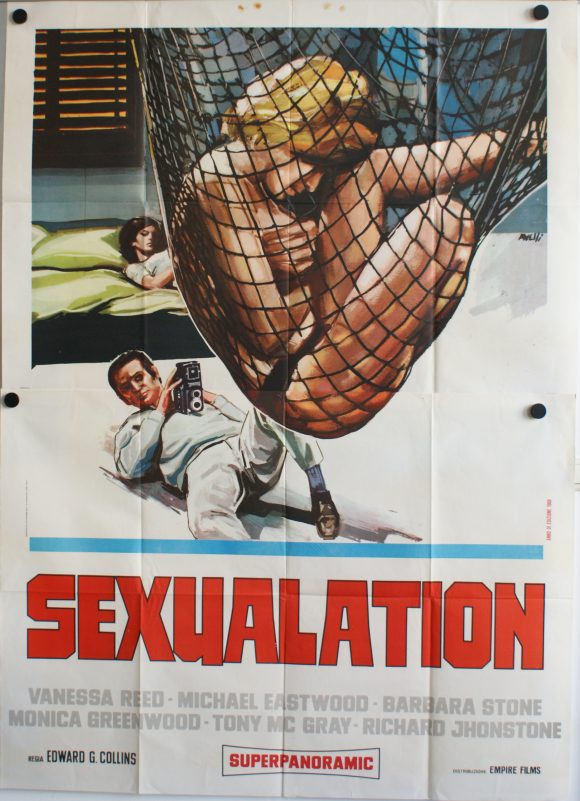