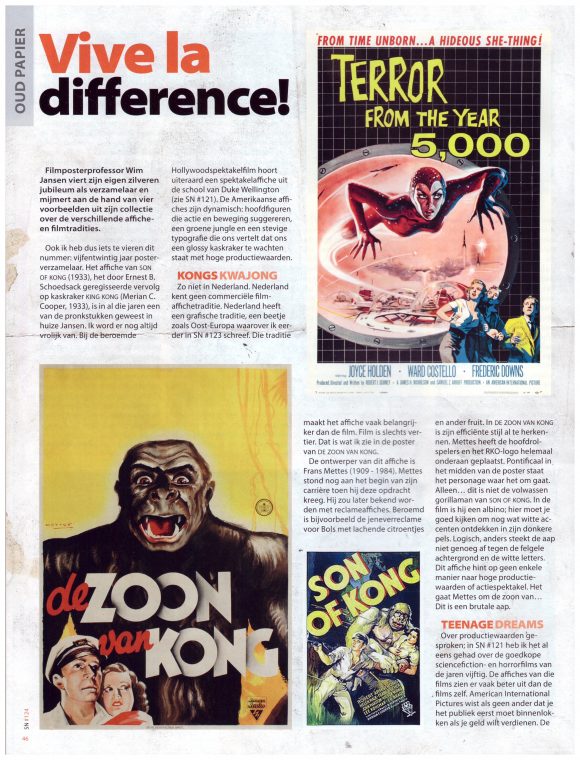 I must admit I neglected this blog somewhat. HEY PEOPLE, I’VE BEEN BUSY OKAY!? Anyway I will put that right as there’s good news in the offing. MOVIE★INK. AMSTERDAM will rise again in a new gallery space sometime in early 2018. To catch up I will post my past columns for Schokkend Nieuws as quick as I can. The first one – VIVE LA DIFFERENCE-  is for the 25th Anniversary issue from March 2017.

Filmposterprofessor Wim Jansen is having his own Silver Anniversary, but as a collector, and muses about different traditions in poster design and in movies using four examples from his collection.

The Dutch poster for SON OF KONG (1933), sequel to box office smash KING KONG is a much loved part of the Jansen household for years and it makes me happy every time I glance at it. For a big Hollywood spectacle movie you need of course a big spectacle poster the way Duke Wellington envisages (for his introduction read my first column Sting in the tail). American designs for these kind of titles – see small image- are dynamic: the principal figures suggest action and movement to the backdrop of a green jungle with bold typography that tells us we are in for a glossy box office smash with high end production values.

Such is not the case in the Netherlands. The Netherlands don’t have a commercial film poster tradition at this time, but a more artistic graphic design tradition. This tradition often puts the design before the movie. Movies are just amusement, graphic design is art. There is a bit of both in the design for SON OF KONG by Frans Mettes (1909-1984). Mettes had just started out as a designer when he got this assignment. Later in his career he became well known for his comic cartoon like advertising posters. Famous for example are his posters with laughing oranges or other happy fruit for liquor companies or fruit itself. See examples here! In the SON OF KONG Mettes’ efficient style is already recognizable. Mettes places the leading actors and the RKO logo at the bottom. Right there in the middle is the figure it’s all about. However he does not choose the full grown adult male gorilla. Mettes also downplays the fact that the Son of Kong is an albino. He uses a few white accents in an otherwise dark pelt. That’s a much better contrast against the happy yellow background and white lettering and the barely visible single liana. This poster hints in no way to a big spectacle movie or to high production values. Mettes accentuates the “SON OF” dimension. First and foremost this is a cheeky monkey.

Talking about high end production values, in STING IN THE TAIL I already touched on de low budget SCI-FI and horror movies of the 1950’s. Here the posters often look better than the movies themselves. The company AMERICAN INTERNATIONAL PICTURES knew all too well that you need to draw the public in first to make money. The actual screening itself is less relevant. AIP had a few aces up their sleeves in this area with the pulp pin-up posters of REYNOLD BROWN and ALBERT KALLIS. Brown, originally an illustrator in advertising and book design, was lured to AIP by art director Albert Kallis. Kallis himself was hired earlier by producer-director ROGER CORMAN in 1951. Brown and Kallis specialize in characteristic combination of pin-ups and action scenes. Their best designs also have sharp, clear lines that gives an extra, may I say sexy?, edge. One of the best examples is TERROR FROM THE YEAR 5,000 (Robert J. Gurney, 1958). This design is by Kallis. The anxious figures in the right bottom corner, the stylish futuristic decor. From the porthole enters a “she-thing”. The tagline says she is “hideous:, but …..wow! There’s another reason for a teenager in the 1950’s not to fall asleep!

Skeletons in the Cupboard

WILLIAM CASTLE (1914-1977) was another specialist for getting teenagers into the cinema. He was the master of the gimmick and sold cheap tricks as technical innovation. Percepto! for example, a few cinema seats equipped with a buzzer to set off the public to scream at the right time in THE TINGLER (1959). For HOUSE ON HAUNTED HILL (1959) he came up with Emergo! It’s nothing more really than a skeleton with red lights as eyes hoisted through the cinema with a rail on exactly the right time in the final scene. Simple but very effective. No other than VINCENT PRICE plays the leading role. He invites a few people to a desolate mansion to take part in a mystery game. This is nothing more than a ruse to kill his adulterous wife and a few others. The victims are reduced to skeletons by dumping the bodies in a vat of acid. The American posters (probably designed by REYNOLD BROWN, here he is again) accentuate the sensational gimmick of the skeleton with Price holding the chopped off head of a woman in the one hand and a candle in the other. Not in Italy though. 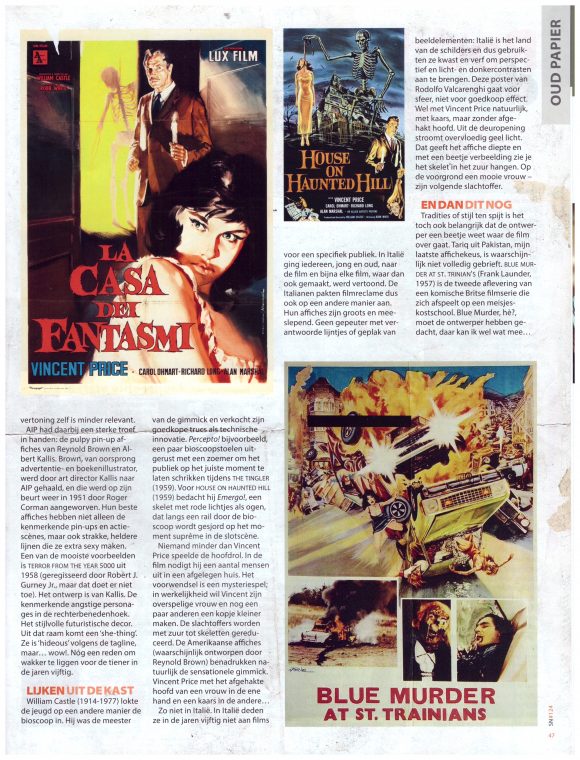 There does not seem to be a specific target audience in Italy in the 1950’s. In Italy the young and the old went to the cinema whatever title was on offer often as a communal activity. As a general rule Italian posters reflect that. They are big and exuberant. No tampering with accountable line work or the cut and paste of separate visual elements. Italy is the land of painters and so paint and brush is used to apply perspective and contrasts of light and dark. The shown design of RODOLFO VALCARENGHI is less shock and more atmosphere. Price is there of course, with candle, but an extra chopped off head is unnecessary. From the half-open door streams abundant yellow light. It gives the poster depth and with a little imagination you can picture an earlier victim as skeleton hanging in the acid in the background. Price is in the middle,  a beautiful woman, his next victim, in front of him.

And then another point

In spite of tradition or style it is important that the designer has a faint idea what the subject matter is. TARIQ from Pakistan, the designer of my final choice, probably missed the briefing. BLUE MURDER AT ST. TRINIAN’S (Frank Launder, 1957) is the second installment of a British serie of comedies in the setting of a boarding school for girls. “BLUE MURDER hey?!” the designer must have thought, “I can work with that.”