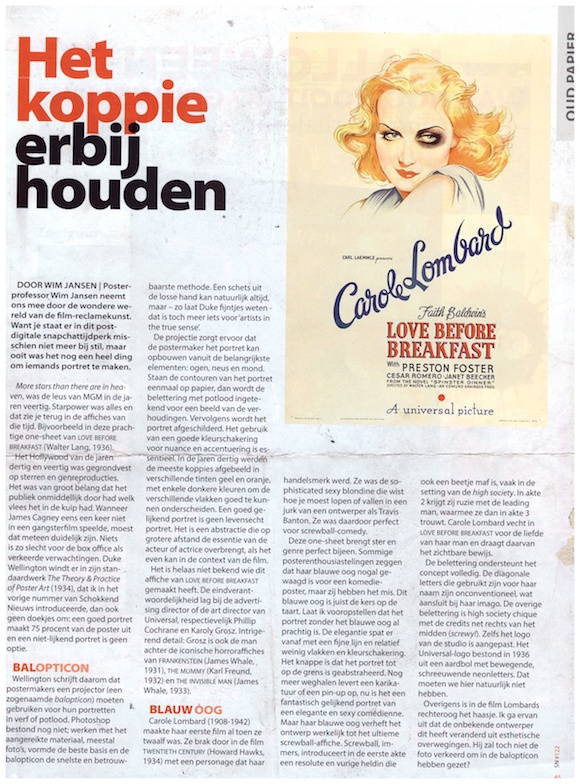 Filmposterprofessor Wim Jansen guides us through the weird and wonderful world of filmadvertising art. Chances are you did not think about it in this post-digital snapchat era, but there was a time it was quite a thing to make a proper portrait.

More stars than there are in heaven was MGM’s claim in the 1940’s. Star power was everything and it shows in the posters of the late thirties and early forties. A nice example is this gorgeous onesheet for LOVE BEFORE BREAKFAST (Walter Lang, 1936). Hollywood of the thirties was built on stars and genre productions. It was important that the public knew instantly what they were going in for. James Cagney playing not a gangster once in a while? No problem as long as that was recognized immediately. Nothing as bad for box office as wrong expectations. DUKE WELLINGTON, whose book The theory & Practice of Poster Art (1934) I introduced in my first column, does not beat about the bush: a good portrait makes 75 % of a poster and a portrait without likeness is a crime.

For that purpose Wellington prescribes the use of a projector (the so-called balopticon) for portraits sketched in paint or pencil. Photoshop did not yet exist; to work with provided materials – usually stills – was the best base for success and the balopticon the quickest and most reliable method. A free hand sketch is of course an option, but – as Duke puts it delicately – is more for the ‘artists in the true sense’. Projection enables the poster artist to build the portrait with the most important elements: eyes, nose and mouth. When the outline of the portrait is ready, the lettering can be penciled in for a good sense of proportion. Then the portrait can be finished with paint and brush. Here the use of the right tints and colors is essential for nuance and accents. In the thirties most ‘heads’ were painted in different tones of yellow and orange with some dark colors to separate the different planes and accentuate the right proportions. A portrait with great likeness is not necessarily lifelike. It’s an abstraction that transfers the essence of an actor or actress from a distance, if possible in the context of the film. Unfortunately I can’t tell you who the designer is of LOVE BEFORE BREAKFAST. The final responsibility for the poster lies either with the advertising director or the art director of UNIVERSAL, respectively PHILLIP COCHRANE and KAROLY GROSZ. Intriguing detail: Grosz is also responsible for the iconic horror posters of FRANKENSTEIN (James Whale, 1931), THE MUMMY (Karl Freund, 1932) and THE INVISIBLE MAN (James Whale, 1933). 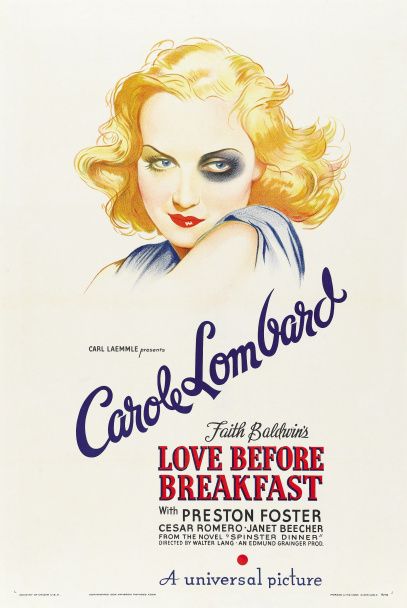 CAROLE LOMBARD (1908-1942) made her first picture aged 12. She made her breakthrough in TWENTIETH CENTURY (Howard Hawks, 1934) with a character that became her trademark. She was the sophisticated sexy blonde who knew how to walk or fall in a Travis Banton dress, perfect for screwball comedy. This one-sheet unites star and genre perfectly. Some poster enthusiasts claim that the black eye is risky for a comedy movie poster, but they are wrong. It’s the cherry on the cake. The poster would be great of course even without the black eye. It is so elegant with a fine line and sparse use of picture planes and color variation. This face is so beautiful because it is abstracted to the limit. Leave more detail out and it becomes a caricature or pin-up. Now it’s a portrait of an elegant and sexy comedic actress with a gorgeous high value of likeness. The black eye though elevates the design to even bigger heights, it’s the ultimate screwball poster. In screwball comedy the first act provides the introduction of the resolute and fiery heroin who is also a bit screwy, often in the setting of high society. In act two she will get in a fight with the leading man, who she marries in act three. Carole Lombard gets in a fight defending her man and carries the mark of a black eye as the visible proof of her love. The lettering supports the concept completely. The diagonal letters that form Lombard’s name are unconventional which suits her image. The other lettering is high society chique with the credits just right of center (screwy!). Even the logo of the studio conforms to the concept. The usual Universal logo in 1936 was a globe with big neon letters (famously moving in the leader of the movies). That’s a bit too course here.

Oh, one little thing. In the movie it is Lombards right eye that gets hit. I assume that the unknown designer of this poster has changed this out of esthetic considerations. Let’s hope that he did not put a still in the balopticon the wrong way around…