STING IN THE TAIL

SCHOKKEND NIEUWS starts a new column: OLD PAPER. Filmposterprofessor Wim Jansen guides us through the weird and wonderful world of filmadvertising art. What makes an interesting poster? This time: big is not always better.

Looked for it for about six years, but then I found it: a reprint edition of The Theory and Practice of Poster Art by Duke Wellington. In this book, originally from 1934, you can find everything what a starting poster designer should know. Theory and Practice will be a recurring theme in Old Paper.

Wellington started out as a painter of advertising boards for circuses and stumbled into film advertising through the NEWMAN THEATRE in Kansas City – one of those baroque movie palaces of the 1920’s. A few years later he became the chief of the art department of the Publix Theatres Corporation in New York. He wrote Theatre and Practice after he started his own agency. According to Wellington film advertising starts and ends with singleness of effect. A well-designed poster imprints a single message in the brain of the viewer. For that effect a poster design consists of two large areas of dark and light with only a handful of objects that are shown as big as possible. More objects or small objects will distract.

A good example of Wellington’s theory is one of my favorite posters, the halfsheet for THE KILLER SHREWS. THE KILLER SHREWS is a low-budget monster movie, directed by Ray Kellogg. In those days filmmakers experimented merrily with the possible effects of radiation or genetic manipulation. In 1959 almost every living creature on God’s green earth was pumped up to massive size on celluloid, so why not a shrew?

At the end of the 1950’s the Hollywood studio system had crumbled. This opened the way for independent film production. All kinds of beginners, amateurs and opportunists could now make a movie with little money and get it distributed in movie theatres or drive-ins as well. The rise of the Z-movie had started. KILLER SHREWS is one of such movies. It was shot somewhere outside Dallas, Texas. Actor Ken Curtis (who became famous as sidekick Festus in the television series Gunsmoke) and radioman Gordon McLendon (attributed to broadcast the first live traffic report in the USA) produced the movie with a small budget. Both men also played a part in the movie and shot at the same time another Z-classic, THE GIANT GILA MONSTER.

The low budget and limited time to produce the movie were disastrous for the quality of the special effects, but not for a successful advertising campagne. The initial investment of $ 123,000– paid back tenfold.

Halfsheets like these measure about 22 inches high and 28 inches wide and are printed on cardstock. Movie theatres use to have special lobby displays for this size. The viewing public could look at the posters up close and at eye level. Sometimes this resulted in rather boring movie paper, for example posters with a lot of explanatory text or just two heads with the names of the stars and nothing else. Due to the landscape format of the poster it fills up quickly and it offers less depth than the portrait format.

The KILLER SHREWS halfsheet is special, because it toys with monster movie cliches. In 1959 the average Joe Public was bombarded with the KING KONG-effect and had seen loads of spiders, ants or other small pests or beasts towering above him with the warning shout “GET OUT OF THE WAY, MONSTER INCOMING!”  The (unfortunately anonymous) designer of the KILLER SHREWS halfsheet found singleness of effect in a more subtle way by literally choosing the tail end of the plot. 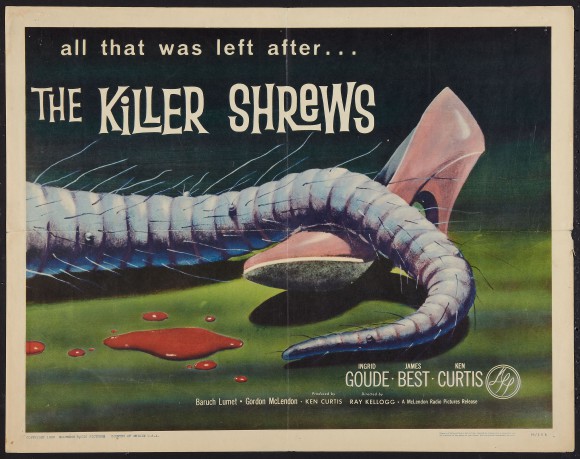 The poster is, as Wellington laid down, divided in two large areas on top of each other. This gives a sense of depth that enables the four defining objects to be large and visible. The upper area is dark, the lower area is light. These areas are green being the colour of horror. In the green areas there’s a kind of rebus of three very colourful objects: purple tail + red pool of blood + pink ladies pump. A shrew itself is not the scariest animal in the world. It’s basically a lot of fur with two small, beady eyes. To inflate such an animal to monster proportions is less effective than say an eight-legged spider or a praying mantis. To show just the tail has much more threatening effect. The tail is draped delicately across the full width of the poster. The blood is red and looks fresh. The pink pump symbolizes youth and sex. The answer to the rebus is written above it in straight, simple and neutral white lettering: “All that was left after…” and than the title in free, more genre specific, lettering: THE KILLER SHREWS.

The message is clear. We are too late. No use shouting out a warning.