Been very busy this week after acquiring the poster collection of Steef Davidson in partnership with Cine Qua Non. Steef Davidson was a driven political artist and poster collector who sadly died a few years ago. This link here is his obituary by the International Institute for Social History and this one a loving memoriam by some of his friends. We are very happy with this collection, even in the knowledge that before our acquisition key parts of this collection are donated to the International Institute for Social History and the Jewish History Museum. In the near future MOVIE INK. will host several exhibits to showcase the collection and Davidson’s legacy. After three days of checking out the multiple rolls of paper and printing transparencies I still haven’t seen everything, but I’m already very impressed and overjoyed with the variety and quality of the collection. The biggest part of the collection consists of political posters from the sixties and seventies. Davidson, an ultimate cultural activist, played a big part in the use of the power of print in this era. Inspired by the Paris student revolt he set up DE VRIJE ZEEFDRUKKER (The Free Silk-Screen Artist) to assist the anti-speculation and squatters movement. His work for the Vrije Zeefdrukker is represented very well in the collection, just as the works of the French ATELIER POPULAIRE, the English PADDINGTON PRINTSHOP and  POSTER-FILM COLLECTIVE as well as German artist KLAUS STAECK. Another pleasant surprise is the small collection Davidson used curating the exhibit THE ART OF PROTEST – POSTERS 1965-1975 in the STEDELIJK MUSEUM AMSTERDAM.

It’s not only political though as Davidson also was a passionate collector of all kind of posters. There’s a small collection of film posters with a humongous sixsheet for THE CONSTANT WOMAN from 1933 mounted on some kind of circus tent canvas and an English onesheet for FIXING A FLIRT that is a cool 100 years old. Also very cool are a handful of posters (Italian, German and French) from 1913, unknown titles, but beautiful posters. Other highlights are music posters for the AVALON BALLROOM with designers like Rick Griffin, Latvian theatre posters and unique publicity posters for 1982 exhibits in Gallery WARMOES 139 in Amsterdam.

Well I’m shutting up now. Tomorrow I will check out the remaining rolls. I can’t wait. It will take some time, but I will regularly update over the coming months with images. Images speak louder than words. 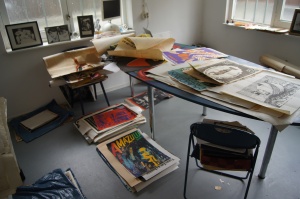 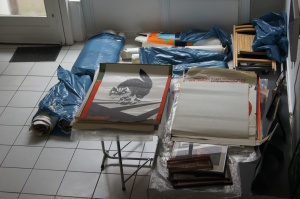