New Years Day now, just enough time to make one list for 2011, that of my best buys in 2011. By ‘best buys’ I don’t mean the cheapest bargains or the most expensive acquisitions. The buys I love the most are usually the ones I’ve been looking for a long time or strike some kind of personal connection. Here’s my top 10 of 2011 in no particular order.

Themroc made in 1973 by French director Claude Faraldo  was one of my first “unusual” anarchic movies I saw and I still love it very much. This story of Michel Piccoli going caveman after years of the same old rut, making his own cave in a community flat and hunting policemen at night for dinner should be seen by anybody who likes movies. It’s not  often shown, which is a shame and Faraldo only made a handful of movies (probably an even bigger shame). Posters for this title don’t show up regularly neither, so I was very happy to find this one.

I’ve tried not to include the posters on which I’ve posted earlier in 2010, but I must make an exception for this one. I stayed on the scent for one and a half years until I found a copy in decent condition for not too much money. Just a short time ago I would abandon my pre-set limit and buy it anyway for too much money, but this year, for the first time, I’ve been pretty disciplined and let the various too expensive ones go. 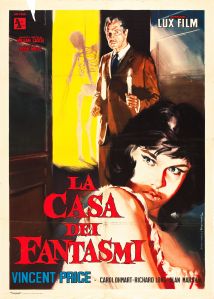 I’ve been looking for an American half- or onesheet for this title even longer than for the KILLER SHREWS. Somehow the price of these posters recently have shot up so quickly that it isn’t funny any more. In addition to the ever climbing prices, my consequent searching for this sombre iconic US poster made me loose interest. I’ve bought this Italian one instead when the opportunity was there and am glad I did. I love the bold colours, I love the girl on the front, it is much more difficult to find than the US-posters and it’s bigger! I think I can wait a lot longer now for the US poster, hopefully the prices will drop again in the future.

ROSEMARY’S BABY by Roman Polanski I did not like at all when I saw it the first time. I thought it was slow and tedious. Mia Farrow’s dream sequence stuck in my mind though. It prompted me to watch it again, have done so quite a few times and what do you know I really like it now. A similar thing happened with this poster. I’ve never looked for it and never gave it a second glance. I really just bought it as I had bought other posters by the same dealer. Anyway, love the design by Stephen Frankfurt (see more: The Movie Posters of Stephen Frankfurt), especially the use of that wonderful brooding green.

Please click the link for a short overview:Elke Sommer In Artis

Stills have become my major source of joy and surprise. I generally buy small collections or bulk lots in stead of single stills. It’s like buying yourself a present without knowing what it is. Here’s a short series of stills made by Dutch PR-agency Charles Aerts Productions. They show Elke Sommer and her husband at the time, actor Joe Hyams, visiting Artis, the Amsterdam Zoo. It happens that I spend a lot of time in Artis when I was a youngster, climbing fences to secure free entrance, collecting (of course) bird feathers or porcupine spines. I can recall these carousel- like animal enclosures that can be seen on the stills. Ah memories.

Wow, what can I say. Just beautiful. I think the only time last year I did not care how high the bids would stack up against me. Unknown movie, have not seen it, but had to have this poster.

7. Strangers On A Train

Another favourite movie of mine. Great movie. This is the best lobby card you can get. Spotlight on psychopath Robert Walker with his hands loosely around the neck of Ruth Roman, fiancée of hero Farley Granger. A scene that won’t be seen in the movie.

Now I get to the part of favourite people. I’ve written quite a bit about Martin Scorsese last year and I’m still wrestling with a project inspired by him. I haven’t made the progress I would have like to have made. TAXI DRIVER is very important for me, it marks the beginning of my passion for movies. Maybe this poster is the talisman for success in 2011. It’s not particularly beautiful, but it certainly catches the mood. Added bonus is the description “Restricted” on this poster with it’s adult movie sign in black and white.

Gloria Grahame, there are not more actresses more film noir than she is. Not particularly beautiful, but a sultry blonde femme fatale with husky voice on the one hand and a screeching spoilt little brat that won’t make it ever on the other. This Belgian poster is the best for HUMAN DESIRE, Fritz Lang’s noir version of LA BETE HUMAINE by Emile Zola.

10. Jean Simmons on the verge of her breakthrough wearing Musketeers in 1946 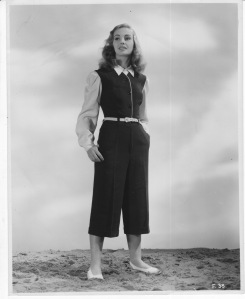 Apparently swashbuckling Stewart Granger saw Jean Simmons in BLACK NARCISSUS (by Michael Powell and Emeric Pressberger) and fell in love with her on the screen. I second that emotion. Jean Simmons as Kanchi alone is enough to watch BLACK NARCISSUS over and over. Never thought a film about nuns would have that effect. Jean Simmons’ beauty particularly shows well on the screen and on stills and not so much on poster art work. Maybe her features are just a touch too delicate for brush and pencil. This still shows Jean rather as a young girl in stead of a professional actress. She had played small bit parts in several movies in 1945 and was about to explode on the scene. Here’s the text on the snipe on the back of the still:

“All set on the holidays – lovely JEAN SIMMONS, a Rank starlet who will shortly be seen in the Cineguild production GREAT EXPECTATIONS and Two Cities HUNGRY HILL, wears these three quarter length slacks, called “Musketeers”. This outfit is in blue with pipings of white, white belt and shirt to match. JEAN will shortly be seen in BLACK NARCISSUS & UNCLE SILAS.”

Invaluable information and sound fashion advice I’m sure you will agree.