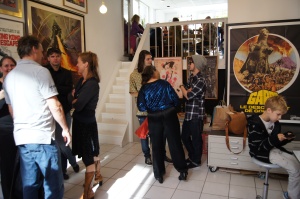 Well that was nice.  Yesterday MOVIE INK. officially opened and the first exhibition is launched. It was quite tough to decide what to have as an exhibition as the gallery is quite small. Also it had to be something that encapsulates what MOVIE INK. should be, that is fun with a serious tone or serious stuff with a tone of irony. I don’t want MOVIE INK. to be a static place with alarms everywhere, because the “collection is so valuable”. If I wanted that I would have looked for a bunker. Furthermore I’d like to change posters often, so I opted for an easy-change system with light frames and as little glass as possible.

So FUKUSHIMA MON AMOUR it is, going for the fun with serious undertone. I like to combine the low art appeal of Godzilla – the radioactivity created monster-  and the high art of Hiroshima Mon Amour -the nouvelle vague classic. The Japanese monster posters aren’t just fun, Godzilla and his fellow monsters have become global cultural icons. It’s also a good excuse for some sushi and sake. The sushi was gone in no time, just like the Japanese soda pop,  but we still have some sake and Sapporo beers for future guests. 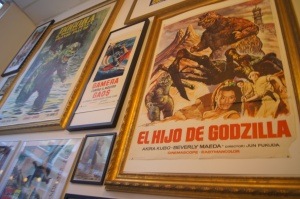 As I was chattering away aimlessly, I forgot to take pictures until quite late. Sorry about that. There is so much to tell about the back stories, the different monsters and the various episodes of the movies, but too much words would spoil the fun-aspect. However a few points are nice to add to the pictures of the opening and the posters that can be seen in the background. As I am still a bit tender, those stories have to wait until tomorrow though.