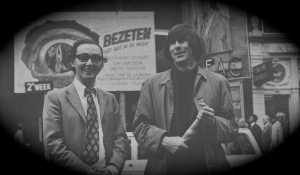 Pim de la Parra and Wim Verstappen in front of a billboard for Obsessions at the Cineac Damrak theatre, Amsterdam

Marijke Boonstra’s first film for Pim en Wim, Obsessions aka Bezeten – het gat in de muur from 1969, is the second link between Scorsese and Amsterdam. Obsessions was the first feature of de la Parra as a director and was quite ambitious as a project. After a few commercial failures $corpio Films needed a success. obsessions was meant to be English spoken and de la Parra asked Scorsese as co-writer. Main task was to be the deletion and correction of what Pim de la Parra calls “my crappy English” en to aid in the streamlining of the narrative. Scorsese’s fee was to be $500. In the end Scorsese has not worked a lot on the script. Back in New York he separated from his first wife, as Scorsese explained to de la Parra meeting again in Cannes in 1974. The cheque, sent by Wim Verstappen, had only reached Scorsese’s ex-wife who had kept it without saying anything. In regards to Scorsese’s contribution, he did write in a letter as first reaction on the script “as a whole, I think the script is very good – well-knitted together – tight fast-paced, and, no matter how well I know the story, still rather exciting”.

Obsessions, which is the first Dutch-German co-production after World War II, is to be restored by the EYE Film Institute and will probably be re-released in 2012. This is in itself an exciting occasion, because the film has, next to Scorsese’s small but rare contribution, another special feature. It is the only Dutch movie with a score by legendary composer Bernard Herrmann, who wrote the scores for Citizen Kane, Vertigo, Psycho, the Birds, Fahrenheit 451 and… Taxi Driver. Dutch filmmakers simply could not pay for a contribution by Herrmann, but he, de la Parra and Verstappen got befriended after Francois Truffaut introduced them. Herrmann did them a kind turn. He had a large collection of music made for American television series that were not used. For Obsessions he put a few of those together and an original score by Herrmann was born.

In 1975 Scorsese dropped by again in Osdorp. Shooting for Taxi Driver was finished and he was in need of a composer. Pim de la Parra advised him to call Herrmann in London. He might be talked in working for a lower fee than usual if he could work with a full orchestra. Scorsese picked up on that. De la Parra called straight from Osdorp, spoke a few introducing words and three days later Scorsese en Herrmann met up in London. And that’s how the making of Taxi Driver also should be contributed to a couple of guys from Amsterdam.

Page 4 of original article in Dutch